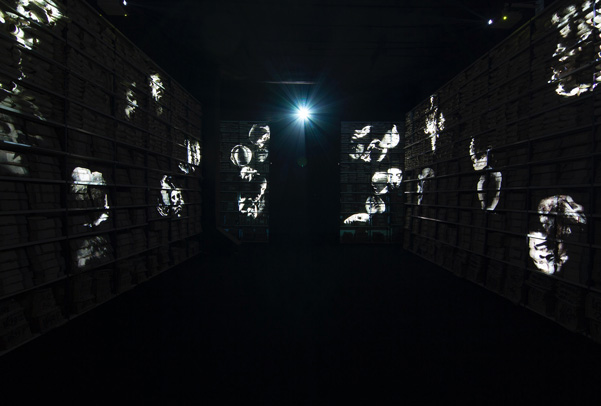 “Moltitudini” is back by popular request. The multimedia installation by Antonio Biasiucci, resident artist at ilCartastorie | Museum of the Banco di Napoli Historical Archives, will be open to the public from May 15 to July 31, 2018 in the great hall of the Archives. It is a site-specific installation curated by Gianluca Riccio, open to the public free of charge from Monday to Friday, from 10 a.m. to 6 p.m. (doors close at 5:30 p.m.).

Biasiucci’s work was inspired by the patrimony of memories represented by the Banco di Napoli Historical Archives, with its 80 kilometers of shelves containing large tomes full of thousands of transactions and the fascinating reasons for payment that reconstruct a vivid picture of Naples and all of Southern Italy since 1573.

With Moltitudini, the visitor is immersed in a space that at first is completely dark, and then is animated by the subtle appearance of hundreds of faces and things that are projected onto the spines of the ancient tomes, bringing the 17 million names found in the Archives to life, as if this place of memory contained all of humanity.

Antonio Biasiucci, born in 1961, started his career with a study on personal memory, by photographing the rites,the spaces and people of his native village, Dragoni (Caserta). In 1987 he met Antonio Neiwiller, the theater actor and director: the two then began a collaboration which lasted until 1993, the year Neiwiller died. Biasiucci has always explored the themes of the culture of the South and his interest has more recently been transformed into a study of the primary elements of existence. He has received many awards, such as the “European Kodak Panorama” prize, and the “Kraszna/Krausz Photography Book Awards”. Many of his works are part of permanent collections in museums and institutions, in Italy and abroad.