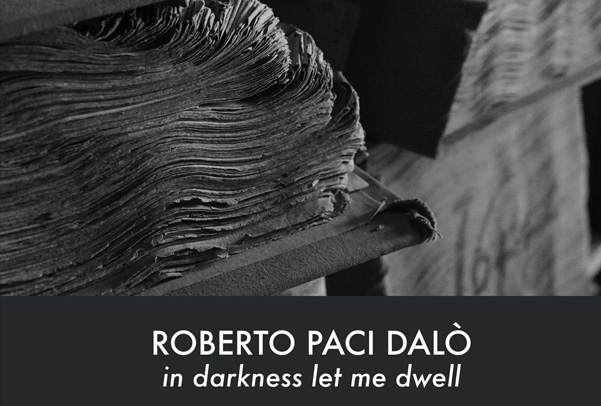 In Darkness Let Me Dwell

On Friday, May 11, at 6:30 p.m. at the Banco di Napoli Historical Archives, a video by the artist Roberto Paci Dalò  entitled “In darkness let me dwell” was presented.

A trip through the Archives as a living memory. Mapmaking in movement, where the narrative territory of geography can be expanded into history. In darkness let me dwell is the new project by the artist Roberto Paci Dalò  in which the Historical Archives of the Banco di Napoli Historical Archives becomes the subject of a video based on a cinematographical exploration of this extraordinary place.

A voyage into the details, the unfolding of history, but also of the hidden dimensions of those microstories made up of images and imperceptible sounds coming from the pages of the large folders. Roberto Paci Dalò gives voice to those pages — which represent the cultural patrimony of the city of Naples — through evocative electronic background music and the brillian use of black and white that is characteristic of his cinematographic work. The result is the creation of a timeless video that generates a suspended state of being similar to a film noir of the 1940s with their lights and shadows, where the documents of the Archives suddenly become deserts, landscapes, and architectural structures. In darkness let me dwell is a composition that was published in 1610 by the lute player and composer John Dowland. “In his works, the main emotion is melancholy, but it is a poetic melancholy: not a mental disorder that consumes and destroys, but a profound meditative state that inspires creative production.” (Claire Seymour).

An ideal voyage to restore the sounds of the Archive, its voice, because, as Giuliana Bruno said, paraphrasing Walter Benjamin: ” It is not only the date which creates the memory that History recalls. History — like a personal microstory — has a place in places”.

The project delves into and continues the work that Paci Dalò did in 2009 with the film Atlas of Emotion Stream (commissioned by PAN Palazzo delle Arti di Napoli as an audio-video installation) a continuing study of the city of Naples which began in 1993 with the audio-video installation Napoli, and acoustic portrait of the city, published in a CD edition by the Morra Foundation (currently on view at the MAXXI in Rome).

The Italian director, composer and visual artist Roberto Paci Dalò is a pioneer in the relationship between art and digital technologies applied to the relationship between design, sound, theater, cinema and radio. After winning the Naples Prize in 2015, he received the admiration and support of artists such as Aleksandr Sokurov and John Cage. He has presente dhis works at the Biennale di Venezia, Kunsthalle Wien, Power Station of Art Shanghai, Fundaciò Joan Mirò Barcelona, Palais des Beaux Arts Bruxelles, Wien Modern, Ars Electronica Linz, Festival di Locarno, MQ MuseumsQuartier Wien, Charlottenborg Copenhagen, ZKM Karlsruhe, SH Contemporary Shanghai, and the Opera of Vienna. He is has been leader of the group called Giardini Pensili since 1985. He is also a member of the Internationale Heiner Müller Gesellschaft in Berlin and of the British Cartographic Society. He teaches Interaction Design at UNIRSM where he directs Usmaradio, which he founded.